What do you know about ALS?

Amyotrophic Lateral Sclerosis is a disease of nervous system that effects the cells and the whole system comprising of nerves and ganglions. Neurons, as we speak, are the functional unit of the sensory system of human body. They perform all the movements of muscles that results in the action of breathing, talking, eating etc. ALS goes on increasing in magnitude over the course of time. Till today there is no treatment that is available for ALS. Some work is done on stem cell therapy and it is hoped that this would come in handy in near future.

Derived from the Greek word,Amyotrophic means “no muscle nourishment”.

A rough estimate shows that a large number of people, nearly around fifty-six hundred people per year are diagnosed with multiple sclerosis. ALS occurs throughout the world more commonly in adults and aged people than in younger ones. This disease doesn’t discriminate between people on the basis of race, culture, social and economic status. Around 15 people a day worldwide fall prey to it.

What is the cause of ALS?

As mentioned above, the exact cause of this disease is not known. Impaired immune response can result in killing of a person’s neuron cells. Chemicals that affect the motor neurons when present in excess can result in ALS. Some studies concluded that superoxide dismutase (SOD1), an enzyme, is sometimes related with a case of ALS and it might be one of the causes. Genetics can be considered a prime cause but other factors like environment, viruses, food, infectious entities etc. can be categorized as cause.

As this disease effect motor neurons, so all voluntary functions are impaired up to an extent. So, in order to detect whether a person is suffering from ALS or not, a series of tests are conducted on patients which include Electromyography (EMG), Magnetic resonance image (MRI), Nerves conduction study (NCS). Electromyography check the electrical conductibility of the muscles as to see if muscles respond to a nervous stimulus properly. MRI is also referred to the patient along with hematological and urine tests. Nerves conduction study is also performed on the nerves. A physician first takes into account the patients’ medical history and perform tests in accordance with it.

ALS grows slowly and progressively. Its symptoms occur over a period of time. From slight difficulty in major voluntary movements like speaking, walking and swallowing to muscle twitching and stiffness ultimately leading to muscle atrophy. The symptoms of ALS are mostly ignored but as time passes, they impose severe muscle in availability. The preliminary signs that can be seen in patients are of the hands or arms. These people are not perfectly able to do stuff like writing something, or open a lock, or wear a shirt etc. Their muscular movements become impaired as time goes by and ultimately leads to devastating consequences. 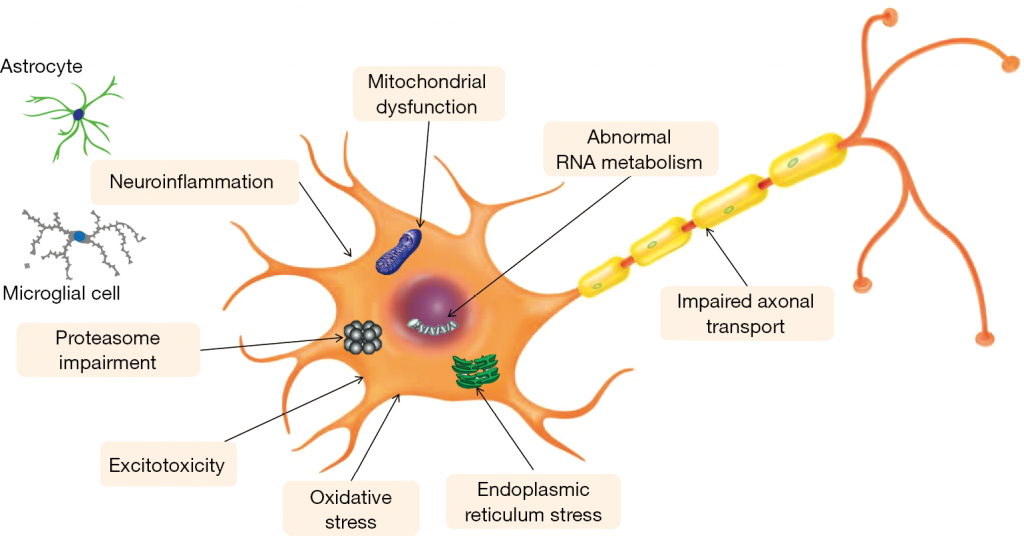 Gradual and mostly painless onset and progressive muscle weakness are the initial characteristics of ALS. Other symptoms may vary but can include dropping things on ground, inability to walk properly, tripping over things, not able to hold things properly and fatigue. Slurred speech, hand clumsiness and muscle cramps of arm, shoulder and tongueare also symptoms of ALS.

Stem cells are a group of biological cells that are present in our body. They are highly undifferentiated cells and they only differentiate when there is a harmful injury to body resulting in massive cell loss of an organ or when a disease is prevalent in human body. These cells are produced during the blastocyst phase and can be seen in an embryo. They are also present in a fully developed adult tissues but they remain in non-dividing stage throughout the course of their lives. They have the ability to differentiate into specific cells and divide in order to obtain more cells.

Stem cells are present in different type of tissues like that of liver, brain, blood vasculature, bone marrow and skin etc. The mechanism of wound healing can be explained by these stem cells. These cells may be some types difficult to identify because they are in non-dividing and non-specific state. They, when needed, can divide infinitely and nonspecifically. A lot of research has been going on them. Now a day’s people are trying to save the umbilical cord of a new born as they believe it can help in providing a large amount of stem cells in case of excessive tissue loss or any mishap. Then again factors like infectious agents, fungi, or any life-threatening disease can result if the cord is infected. However, if in future the research goes well, the stem cells will be able to cure a large number of potentially harmful diseases like cancer, diabetes and Parkinson’s etc.

Use of Mesenchymal stem cells (MSC) for treating ALS

Stem cell therapy is used to treat multiple sclerosis and ALS. Mesenchymal stem cell therapy is of utmost importance due to its ability to provide growth factors for regulating immune responses. Thus, they can be used to cure immune motor disorders like ALS.

Mesenchymal stem cells provide the neurons with some proteins that are required for the establishment, maturity and growth of neuronal tissue. Transplantation of mesenchymal cells has resulted in alleviation of symptoms of ALS like speech problems, tripping, inability to control muscle movements, twitching and spams. The replacement of dead neuronal cells with mesenchymal cells is more productive and feasible.

Following are the therapies that are helpful in ALS

Results of the ALS stem therapy

Stem cells have shown a large number of desirable effects all over the world. Thousands of ALS patients are cured thanks to the stem cell therapy. Stem cell therapy has revolutionized our lives by controlling the subsequent progression and development of the disease. Due to it, the patients are enjoying a good and healthy life.