Natural Killer (NK) cells are innate immune cells which lyse infected and malignantly transformed cells (cancer cells) by cytotoxic activity. Cytotoxic NK cells contain high numbers of secretory granules which store and release death inducing proteins such as perforin and granzymes. Perforin facilitates the delivery of serine proteases known as granzymes into the target cell by forming a pore either on the endosome or plasma membrane of the target cell. The granzymes released activate three distinct pathways of apoptosis in the target cell. In humans, granzyme B (GrzB) and granzyme A (GrzA) are the most potent activators of apoptosis (Cancer/infected cell death). NK cells also initiate target cell apoptosis (cancer/infected cell death) through tumour necrosis factor (TNF) ligands expressed on NK cells to induce apoptosis. ImmuneCells21 medical center has developed a pioneering weak immune system test to fight cancer and other autoimmune diseases. 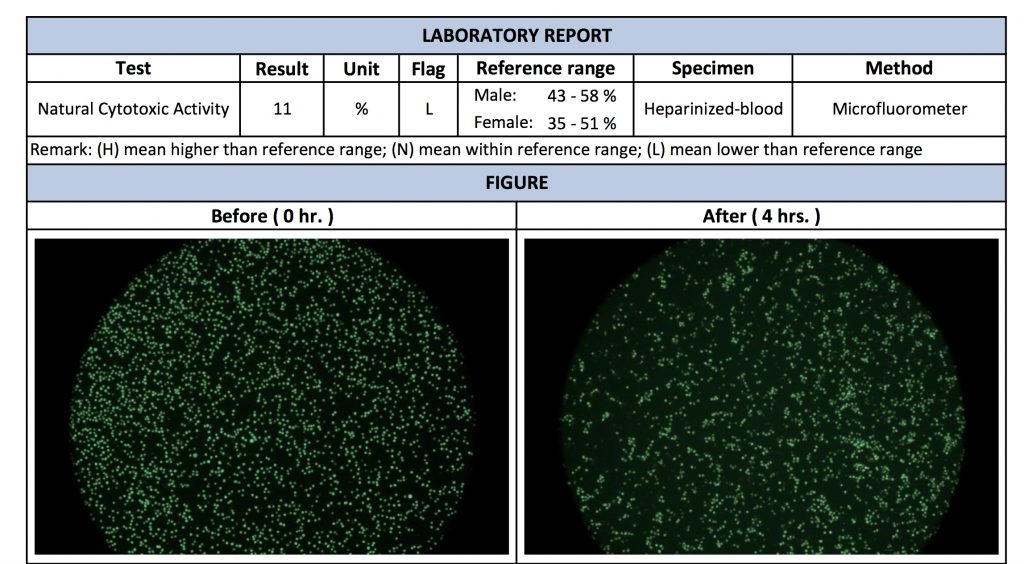 From your own blood we will extract your NK cells to test activity levels. The ability of NK cells to lyse tumour cells is measured  by placing your NK cells with target cancer cells in a culture dish. The cells are then incubated together for 4 hours at 37°C with 5% CO2.

The average reference ranges for healthy patients are:

If you are within the reference range, indicating you have a healthy immune system we would recommend for you to cryo-store your immune cells to be used at a time in the future when they may be needed.

If your result is lower than the reference value, indicating you have an unhealthy immune system, this puts you in the higher risk category of developing cancer and infections. We would recommend to culture and activate your NK cells with our innovative weak immune system test.

A low functioning immune system puts risk to your health. Some possible reasons are:

Other Areas to Check: