Multiple Sclerosis is a chloric and unpredictable neurological disorder of the central nervous system which consists of the spinal cord, optical nerves, and brain. The disorder causes dysfunctions of the neurons as a result of myelin destruction (a substance that surrounds body’s nerve cells). Myelin is a fatty material that plays a vital role in the nervous system because it enables information transmission between neurons. MS causes dysfunction of the musculoskeletal, sensorial and cognitive system and sometimes the condition can have negative effects on activities of internal organs such the kidneys and gastrointestinal tract.

The causes of Multiple Sclerosis are still unknown; however, it is considered an autoimmune disease where the body’s immune system attacks its own tissues.
Who gets multiple sclerosis? Any person can develop multiple sclerosis but there are factors that increase the risk:

• Age: Although multiple sclerosis can happen at any age, persons between the age of fifteen and sixty are at a higher risk
• Sex: Women are more likely to develop Multiple Sclerosis than men
• Genetics (family history): You are more likely to develop MS if any of your parents or sibling has had MS
• Infections: Some of the viruses associated with MS are those that cause infectious mononucleosis and Epstein-Barr
• Race: MS occur in different races such as Asians, Africans, Native Americans and white people specifically those of Northern European descent are at a higher risk of developing this condition
• Climate: This condition is more prevalent in areas with temperate climates like Canada, Europe, and New Zealand
• Autoimmune ailments: You are more likely to develop Multiple Sclerosis if you are suffering from type 1 diabetes, inflammatory bowel disorder or thyroid
• Smoking: Smokers are at a higher risk of getting MS

The effects of this condition vary from one patient to another. Some patients may have mild signs and symptoms and may not require treatment while others will have challenges getting around and performing daily activities.

Currently, Multiple Sclerosis medication only helps manage the symptoms by suppressing, slowing down or altering the body’s immune system activity. These drugs don’t repair the damaged myelin but instead exposes one to fatal and life-threatening side effects.
Multiple sclerosis stem cell therapy works more effectively on the disease. Here´s how. 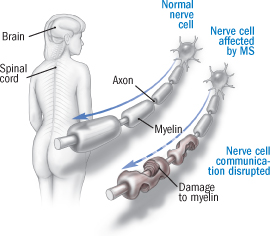 Adipose tissue has various cell types and one of them is the stromal-vascular fraction (SVF) which has a lot of adipose-derived stem cells as well as high concentrations of other crucial components like T-regulatory cells, endothelial precursor cells with strong immune-modulatory and anti-inflammatory features. Additionally, they easily integrate with different body specialized cells.
They also create extra cells that assist other stem cells perform effectively as well as have the capacity to selective enhance injured tissues and repair them.

What is HSCT treatment for multiple sclerosis?

AHSCT is an intensive MS treatment option that involves the following steps:

Supportive medical treatment is offered immediately in cases where patients are at an increased risk of bleeding or contracting infection as a result of extreme immune suppression.

Risks and side effects of AHSCT

AHSCT is a very hostile treatment option; it causes:
• Fatigue
• Weakness
• Hair loss
• Usually, it takes 6 months to one year which is a long recovery time
• Sometimes, it can take a month for the immune system to rebuild and start functioning perfectly
• Your body becomes susceptible to infections
• The death rate of people living with multiple sclerosis who undergo HSCT procedure is 1.3% (1 or 2 in every 100)